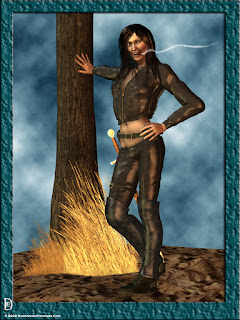 This image was created by the incomparable J E Draft, who is that very rare creature, a webcomic writer who is also a natural storyteller. His webcomic, The Challenges of Zona is, if you can ignore his predilection for excessively-endowed Amazons, a consistently enjoyable read with strong characters and a strong story.

He did the image above as a gift, since I had made a couple of donations to his webcomic. He does these character portraits for anyone who'll send a donation. This one is based on the following passages from one of my books:

A staff nurse knocked and entered.

"I think you better come and see this," she said. Her voice was weak and agitated.

She led him down to the A and E reception, where there was an unusual quiet. The lights had begun to buzz, dimming a little. In places they flickered and went out for a moment before buzzing back on again.
Standing by the reception counter was a woman. Her face, even beneath the grime that covered it, was very pale. Her hair was black, and long and straight and lank and dirty and it clung to the leather of her jacket. For a moment he took her for a biker chick, but only for a moment. Although she was thin, almost emaciated around the cheeks, she radiated steely strength. Her legs were neither long, nor shapely, but straight and strong, and clad in the same thick black leather as the jacket. The leather was articulated at the knee. Her arms were likewise strong, but this was evidenced by the fact that she held the triage nurse by the front of her uniform and had lifted her clean off the ground.

She wore a sword in her belt.

"Put her down," Simon said, levelly.

She turned her head slowly to look at him, and for a moment her eyes held him in the same thrall in which they held everyone else, but he broke free.

"Oh," she said approvingly, then grinned at him hungrily.

He found himself sweating with more than just nerves and concentration.

She turned back to the nurse, now almost limp, and lowered her gently to the floor. She shook the nurse until she gasped and opened her eyes, and then kissed her once, hard, but briefly, on the mouth. Then she threw her over the counter.

There was a crash.

Then all the lights went out.

He felt, rather than heard a movement in the dark, and a slightly rancid, musky smell floated across him.
Almost instantly a match flared in front of his face and he was struck by the sudden smell of sulphur and cordite. He saw her face a foot in front of his as she calmly lit a cigar and puffed the smoke in his face. He could smell her. She smelt mostly of sex and tobacco and BO, but she also smelt of fresh blood. A surgeon tends to recognise it.

He was revolted. What was worse though, was that even lit up by only her cigar he could see that she was far from bad looking.

And her charisma could crush a battleship to scrap.
"Is there a, problem?"

She addressed the question directly to him, but he couldn't see what she could be asking about.

"You mean you're trying to pick a fight?" he said with disbelief.

"However you want it. Only the MT won't last, so you better hurry up and give me what I want."

"All right. What do you want?"

She handed him a list of medicines. Some of them were quite obscure. There was no way she could be a junkie looking for drugs, not with a list like this one, in spite of her appearance. He concluded that the times were too hard to press a point.

He found his way out of the A and E reception by memory, a knack he had discovered as a child, and she seemed to have no trouble following him, although her feet made absolutely no sound whatever. He even stopped a few times to check, and her face, lit by the glowing cigar, grew out of the gloom as she arrived behind him, without a sound. He found his way to the pharmacy and unlocked the door.

She struck another pungent lucifer and lit a small tallow candle. The candle gave off enough light, but it also gave off an unpleasant, knacker's yard smell.

He took the medicines off the shelf one by one, and handed them to her.

"Thanks Doc," she breathed, her breath warm and acrid.

"One more thing," he said as she turned away.

"It's the two states of the transition, isn't it. You go from one to the other for a while, and eventually you're stuck. Don't ask me how it works, or what it means. It's just the names of the two states of transition you see, ‘magic', ‘techno'. ." She stuck her tongue out at him, and turned to go. As she turned the candle went out, and he felt her body pressing against him as she whispered in his ear:

Then all the lights came on, and she was gone. The smell of her cigar, and her, lingered in the air and on his shirt. And he was locked in the pharmacy.

Here's another from the same book. This is much more conventional character establishment, but I pick two examples from the same work since the book is overflowing with this nonsense:

Ellis Brock had not begun life as a Sergeant, but in a different universe he might have done. The son of a music-hall comedian and a Butlins Red-Coat, he had been raised to the entertainment industry and had duly become an actor. His round face, stocky build and slow, steady manner marked him out for the roles of NCOs, sergeants for preference, and he had made a steady living in provincial theatre - with the occasional television role.

The height, if one could call it that, of his success, was to play Sir Walter Blunt in Henry IV Part One at the Almeida Theatre in Islington, and that distant, self effacing and fiercely loyal character had had a profound effect on him. He had realised that his acting ability was not as limited as his acting opportunities (not a great revelation for an actor), but beyond this, he realised that he was not really sergeant material. Underneath that slow, steady, archetypal exterior was a man too romantic for the practicalities demanded of a reliable NCO.

He decided to look for a new job.

An advert in The Stage immediately caught his eye, and rather more out of established habit than as part of his search for a new identity, he replied.

The advert was for full time reenacters for the Westmarch Project. It was both something that would require the use of a character second nature to Ellis Brock, but also something more than the acting he was used to. It would bring a lifestyle. He had happy memories of his boyhood spent in and around holiday camps, and had idealised the sense of camaraderie that existed in these residential entertainment communities.

He was offered an interview at once, and discovered to his delight that the interview was to be with the director of the project, Leopold Thurman.

“I’m going to tell you a secret, Mr Brock. I don’t tell the secret to all the people who work here, but there are quite a few who know, or have an inkling, and there are one or two rumours.

“I’m going to tell you because I would like, if you are amenable, to confer a certain responsibility on you.”
“I take it I’ve got the job then?” Brock had interrupted.

“It must be important to you?”

Brock took a moment or two to reflect, and replied: “I’m an actor, by trade, and currently I have no work - not by accident, mind you, I’ve turned a few things down - but you ought to know that there is only one thing of any importance to the actor without a job: ‘has he got the job?’”

Thurman talked about Westmarch, about the project, and it gradually emerged that the project was rather more than merely a large theme park, or a historical academic project, a re-enactment or a recreation.

“The secret is that this place is not smoke and mirrors. There are no robots. There’s no fibreglass at all. The secret is that Westmarch has to work. It has to function as an independent, self-contained state.”

“We could say I’m a rich, and slightly eccentric academic, who wishes to indulge a little fantasy.”
Brock thought about this for a while, and Thurman watched him in silence.

Thurman went on: “I am careful, but not too much -“

Brock stopped him: “I’m still working this out, but I think, that it’s some sort of survivalism. Like those Americans who stockpile canned goods and firearms, and go into the woods at weekends dressed in camouflage.

Thurman, smiled in surprise and satisfaction.

“When I saw the advert for this job, I was looking for something more than a job. I was looking for a change of lifestyle. I was looking for a job with a sense of community, of belonging, and, I suppose, of common purpose. And that, if I get this right, is what you’re trying to create. Whatever your real motivation is, I think the result is the same. I want in. We can discuss ‘revelation of secrets’ at your pace. I think you’ll find it’s not as heavy a topic as you think.”

Brock paused to take a breath, then rose to his feet, and continued.

“You can right to me with terms of employment and salary. I’ll accept whatever you offer. Now if you could tell me where I can buy a drink, I’ll take my leave of you. All this negotiating has worn me out.”

Brock proffered his had, and Thurman took it an shook it warmly.