In this post I shall be using a word that is considered offensive even in the citation by some. Consequently I have added the tag "NSFW" to the post, but I have not labelled it "adult", as that doesn't conform to my view that it is impossible to give offense, only to take it, and that those that mind don't matter. This said, in the interests of everyone being able to access this, the word itself is included in an image, not in the text, so your filters won't catch it.

I apologise if my use of this word provokes you to take offense. If it does, you need to take a long, hard look at yourself.

Today's word is "cunning". Luckily in modern English, the noun and the adj. are the same.

1
: dexterous or crafty in the use of special resources (as skill or knowledge) or in attaining an end <a cunning plotter>
2
: displaying keen insight <a cunning observation>
3
: characterized by wiliness and trickery <cunning schemes>
4
: prettily appealing : cute <a cunning little kitten>

A word to describe someone or sometimes something that's tricky, devious, sly or shady

"I'd stay away from that cunning chap..he's pretty weird"

UD, gloriously celebrates the shortest possible definition. Its example is characteristically oblique, however. Notice that the resolutely US Webster doesn't call its fourth definition "rare". This usage was common for a while in the mid C20, mostly in the USA. I know of one specific example of this usage in a Judy Garland song... I forget which song (c.f. cute). Also notice that Webster puts third what the other two put first. This is rather conservative of them.

Here's what Doug says about can:

O.E. 1st & 3rd pers. sing. pres. indic. of cunnan "know, have power to, be able," (also "to have carnal knowledge"), from P.Gmc. *kunnan "to be mentally able, to have learned" (cf. O.N. kenna "to know, make known," O.Fris. kanna "to recognize, admit," Ger. kennen "to know," Goth. kannjan "to make known"), from PIE base *gno- (see know). Absorbing the third sense of "to know," that of "to know how to do something" (in addition to "to know as a fact" and "to be acquainted with" something or someone). An O.E. preterite-present verb, its original p.p., couth, survived only in its negation (see uncouth), but cf. could. The prp. has spun off as cunning.

1630s, Scottish and northern England formation from can (v.) in its sense of "know how to;" lit. "knowing," hence, "careful." Often used superciliously of Scots by their southern neighbors, implying "thrift and an eye to the main chance."

(Canny continues to be used in Scotland and the North of England, of someone with specialist knowledge or the particular knowledge required for a specific act or skill. It is also used as a purely positive variant for cunning. Usage is much rarer in southern England.)

There are a couple of important things to note about "can". First is that we can trace it to the (imaginary/theoretical) language "Proto-Indo-European". It is directly related to "know". The second is the first hint at an extremely long standing phonic and cognitive relationship with another lineage of words that I give here: 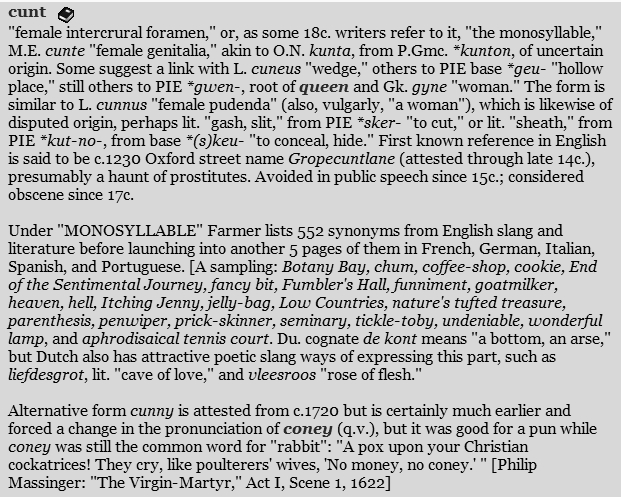 The last word in this set is "quaint", which Webster defines as follows:

1
obsolete : expert, skilled
2
a : marked by skillful design <quaint with many a device in India ink — Herman Melville>
b : marked by beauty or elegance
3
a : unusual or different in character or appearance : odd
b : pleasingly or strikingly old-fashioned or unfamiliar <a quaint phrase>

early 13c., "cunning, proud, ingenious," from O.Fr. cointe "pretty, clever, knowing," from L. cognitus "known," pp. of cognoscere "get or come to know well" (see cognizance). Sense of "old-fashioned but charming" is first attested 1795, and could describe the word itself, which had become rare after c.1700 (though it soon recovered popularity in this secondary sense). Chaucer used quaint and queynte as spellings of c*seeabove*t in "Canterbury Tales" (c.1386), and Andrew Marvell may be punning on it similarly in "To His Coy Mistress" (1650).

Deliberate punning, in addition to the similarity of sound and meaning between can, coney, cunny, canny, cunning, c**t and quaint, have all contributed to the modern meaning of cunning, in particular the sense of slyness and unpredictability, fickleness.


Choosing cunning to establish your character, especially if you prefer it over clever, will lead your reader to feel that this character, while able and skillful, is skillful in deceit and trickery rather than ingenuity or machinery (c.f. machination).

There are examples of heroes who are supremely deceitful but remain sympathetic (one thinks of "Fantastic Mr Fox"), but most are more ambivalent; indeed the most famous, Brer Rabbit often seems to be cunning for the sheer joy of the discomfiture of his opponents, and his gleeful humiliations of Brer Bear and Brer Fox can and do become schadenfreude.

The classical example is Odysseus (Ulysses). Critically, however, Odysseus is a strong and skillful warrior who is counted among the battlefield heroes of the Greeks; he possesses great skill in deceit, but uses it only when it is needed, rather than using it for preference (to compensate for physical weakness) or for his own entertainment (as Brer Rabbit seems to).

Cunning when your character uses it as a tool of necessity will not make readers (and other characters) distrustful of him.