The Long War, by Stephen Baxter and Terry Pratchett

Warning: this is not a book review. I won't be telling you the plot or advizing you to read it, or not read it. I expect you already to have read it, or to go and read it, once you've read my analysis. 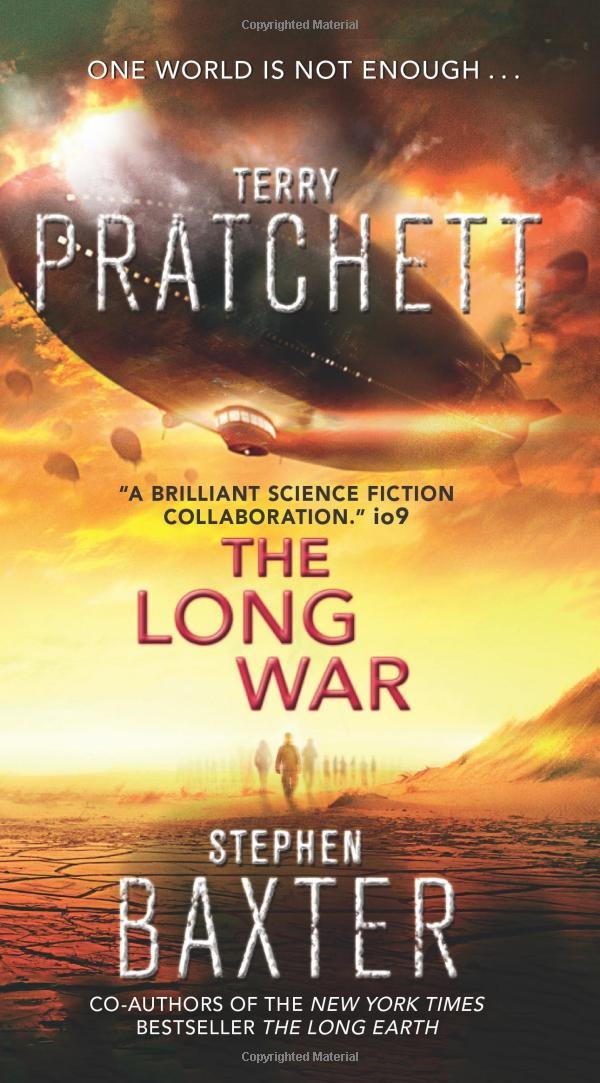 My summary of this book is as follows:

If you know your Pratchett you will know how unusual and surprising that summary is. It is very difficult to identify a Pratchett title that lacks a clear, focused and determined didactic purpose. Most of his books also include incidental or collateral lessons about being human and how to live a good life.

I've often thought that a driving force behind Pratchett's stories is anger, and it may be that what's missing in The Long War is exactly that; the emotion that always worked for Pterry, that always tied his disparate and incongruous incidental ideas together into a powerful narrative whole was that he wanted his reader to know why he was angry, and want to do something about it.

I have no doubt that The Long War's disparate and incongruous incidental ideas come from Pratchett, and his collaboration with Baxter. But the only mind tying it all together here is Baxter's.

At its worst, and knowing Baxter's own work I don't make this remark lightly, this reads like Pratchett fanfic. There are, for instance, obvious nods to classic SF, but they don't all come through the same way. Baxter spots the obvious parallels with Star Trek and signposts them. He spots the obvious parallels with Henlein and lampshades them. But misses the way that Pratchett (in his earliest work) sneaks in echoes of Bradbury. There's a moment where it looks like Pratchett snuck one under Baxter's prodigious fan-radar, and leads the reader up a path that is so suspiciously similar to Eric Frank Russell's "And Then There Were None" you can almost see Pterry smirking.

It falls apart, when Baxter starts showing up the nods to, and echoes of Pterry's back catalogue.

But that isn't what kills it. In fact it isn't even the lack of story.

It's the lack of cutting.

I work with several SF writers, and the good ones spend a lot of time deep in thought about the practicalities of the way their worlds work. What I call the "fantasy economy" - how do people produce and transport food? How do the distribute resources and information? How do they educate their children? How do they obtain medical care? How do the life support systems actually work?

For every SF or fantasy writer that I have to bawl out for failing to think of these important details, there are 10 who have gone to all the necessary trouble to work out the answers.

And they're the worst. Because they put all the answers in the book.

What really destroys this book is the bloat. It is packed with "hard" SF author notes about how everything works.You could probably cut out a third of the text and it would make no noticeable change to the experience. But worse than this, is the repetition. Details that the reader ALREADY KNOWS are reiterated each time a new character turns up in an already visited situation.

There are two basic rules that I have to throw at writers in all genres and this book breaks them carelessly, liberally, and without any thought to the reader's experience. These rules are divine twins, castor and pollux, two sides to the same coin, of Need to Know:

(There is a great deal more I could say about these rules. Narrative Path will probably have to devote whole courses to them.)

Both of these rules are broken so many times in this book that it just isn't a joke.

Baxter can, in his own work, get a little too fond of the effectiveness of his careful hard SF groundwork, but generally curbs it before it gets in the way. I do wonder if he was trying too hard to do justice to the collaboration, and I also wonder if the whole text has been treated with a little too much reverence.